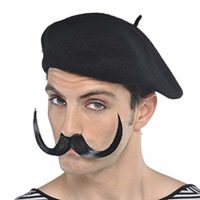 Sources close to Wayfield confirm that he has been holding onto a vintage brown beret “for like, ever, man.” Wayfield’s roommate, Clay Crawford, commented, “When he was an undeclared freshman in Weinberg, Chester would just stare at the top of his wardrobe where he kept the beret every night. Sometimes he’d reach for it, but then decide against it, putting his entire fist in his mouth to stifle a cry.”

The top shelf of Wayfield’s wardrobe is now empty, however, upon his butterfly-like transformation into a film student. “When I got the email welcoming me into School of Comm, in that very instant, it just hit me. This is it… I can finally break out the beret,” Wayfield stated, fighting back tears. “I walk into Louis Hall wearing it and I finally feel like myself.”

Wayfield later noted that he hopes to expand his beret collection in the future. “No good director or cinematographer relies on just one beret. And I aim to be the best of the best.” He went on to describe his Amazon shopping cart, which contained “sequined berets, floppy berets, and berets of all different colors and patterns,” all of which totaling to roughly $435 USD.

Once finished suggesting the best and “most legitimate” beret brands, Wayfield added, “Wait, is it too early to start growing a pencil-thin mustache, too? Oh, and I should probably start practicing how I’m gonna say ‘CUT!’ These are all the things, you see, that make an excellent director. I am going to CRUSH 190!”