Green Book Writers: “Can We Say It Now? Please?” 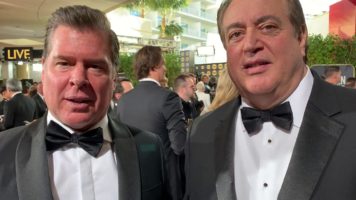 After winning the Oscar for Best Picture for their inspiring buddy comedy that breaks down racial barriers, the all-white writing team of Green Book put out a statement asking for permission to say “the word.”

None of the three Caucasian men who wrote this racism-ending motion picture were willing to elaborate on what the word actually is, only on the fact that they really wanted to say it.

“Look, we did everything,” said writer and Boston native Brian Currie. “We showed that white people and black people can be friends. We’ve dealt a death blow to racism in America. We even got a black guy an Oscar for best supporting actor. I think that we’ve earned the right to say it. And I’m not even talking about saying it for real. Just the less bad version.”

“Ever since I was a child, I’ve dreamed about saying it,” said writer/director Peter Farrelly. “Also making a movie or whatever. We literally wrote a whole screenplay about how black people are no different from white people, okay? And on top of that, 100% of my black friends—that would be Travis and, uh, well… Anyway, Travis told me he’d have no problem if I said it around the house.”

Nick Vallelonga, a writer and the son of the main character, added his take on the issue. “My dad liked a black guy. I’m pretty sure this is open and shut. If you need me, I’ll be singing along to my homie Jay-Z.”

The trio will be making their next stop at the NAACP headquarters in Baltimore, where they will submit an official request for what they have referred to as a “n pass.”