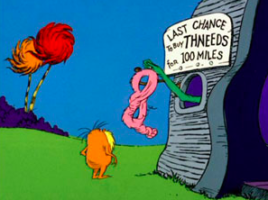 Attorney General William Barr released a summary of “The Lorax” Tuesday that concluded that there was “no evidence” of “any harmful arboreal action” in the book. The summary followed a months-long push by some Congressional Democrats to find a way to sell the Green New Deal environmental plan.
Press Secretary Sarah Huckabee Sanders has called the Lorax investigation “unfounded”, a “witch hunt”, and “green eggs and a sham” while Trump adoption hopeful Eric Trump shared in the euphoria and promised that all Americans would soon be able to read the one-page redacted version of the novel to decide what it says for themselves.
Other commentators were less sure. Democratic congressman Adam Schiff, who has spent several months threatening to subpoena a complete copy of “The Lorax”, claimed Wednesday that Americans had a right to the unredacted copy. Other Democrats have threatened to indict each of the disputed trees.
Meanwhile, experts believe that the succinct writing style and prestigious doctorate of the novel’s author has made him Trump’s next choice to head the Environmental Protection Agency.
Featured, Latest News, No. 275, Politics Donald Trump, Dr. Seuss, Politics