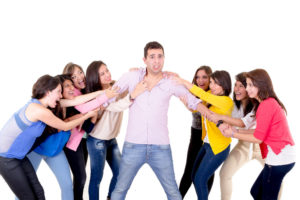 Natalie Izaguirre, a McCormick freshman, reported that she felt flattered, validated, and “a little bit moved” after being catcalled in the fraternity quad on Friday night.

“When that guy yelled out ‘nice ass’ as I walked back to Lincoln, I just felt this tug on my heartstrings,” Izaguirre said. “It was indescribable—the sound was as beautiful and pure as the soft tinkle of an ice cream shop door on the first warm day of the year.”

Izaguirre was too starstruck to approach the catcaller, and could not immediately distinguish him from the crowd of thirteen to fifteen white males wearing throwback NHL jerseys. She continued her journey home, but she hopes to reunite with her admirer soon.

“The sooner I go back and have clumsy, clitoris-ignoring sex with him, the better,” Izaguirre said. “I can just tell from our first interaction that he’s the kind of man I need to be with. I’ve had my fill of guys who don’t shout demeaning things at random passerby.”

Izaguirre reportedly told her parents in Colombia that she will be getting married soon, but they are holding out on purchasing plane tickets for the moment.

“The man may have called her ass nice, and that is excellent,” said Natalie’s mother, Gabriela. “But did he also yell at her that she had an amazing rack and he would totally hit that? We want the best for our daughter, and we cannot let her be snatched up by some good-for-nothing who will not properly sexualize her in public spaces without her permission.”

However, the end of spring quarter may provide a roadblock to the budding relationship, as before the end of the quarter the man’s entire fraternity must move off campus for reasons which are not clear at this time and are probably nothing to worry about.