Not To Be Outdone, Thomas the Tank Engine Writers Announce Percy is Pansexual 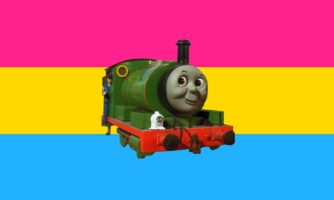 Following the season premiere of Arthur, where it was revealed that Mr. Ratburn is gay, writers for “Thomas & Friends” announced that Percy is pansexual.

“We here at ‘Thomas & Friends’ believe love is love, even for tank engines,” commented Karen Wagner, an official spokesperson for the children’s show.

Percy, the lovable small green engine, will reportedly explore his newfound attractions to his fellow trains, Emily and Gordon, in a three episode arc which will culminate with, as Wagner put it, “the most passionate love-making scene, the likes of which the Island of Sodor has never seen.”

The show has denied that their decision to address Percy’s sexual orientation has anything to do with the spike in “Arthur” ratings following the Mr. Ratburn coming-out episode

“We live in a progressive age, and it’s about time our toddlers understand the nuances of human sexuality,” said Wagner.

She added, “The guys over at ‘Arthur’ showed a gay rat wedding, so what? It’s pretty unoriginal; hasn’t anyone heard of ‘Ratatouille’? Here at ‘Thomas’, we refuse to conform to such an overly-simplistic gay-straight dichotomy. You know what’s been missing in television for people in the revered 0-36 month age range? Pansexual, gender-fluid talking trains. That’s where our show comes in. The queer train has left the station- literally- so get ready for some intense consensual LGBTQ tank-engine intercourse in the coming seasons.”

At press time, “Thomas” writers were in the middle of a heated debate about whether Toby the Tram was a top or bottom.