In an Effort to Reduce Plastic, Fraternity Opts for BODY SHOTS!!! 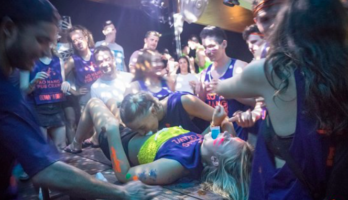 While reusable straws might be enough for sorority sisters, it’s not enough for mother earth. That’s why the brothers at Tappa Tappa Keg passed a unanimous resolution to ditch those cliche red Solo cups for a more sustainable option: body shots.

Fed up with the mistreatment of the planet, Sustainability/Diversity/Lady-Issues chair Brett Green first came up with the idea for the resolution while slurping up some Fireball from the navel of girl known only to him as “the Other Sarah.”

“I just had an epiphany that instead of continuing with such a wasteful cycle of consumerism, we should instead be more resourceful with what was literally right in front of us,” said Green, “They say to ‘shake what yo mama gave you,’ but I think it should be to ‘reuse what mother earthgave us.”

When asked what other sustainable measures TTK has passed, Green, a self-proclaimed marine life activist, said they banned condoms because “it feels bad… for the turtles.” With the resolution going into effect “faster than Luke can shotgun a beer,” nearly every fraternity on campus plans to enthusiastically follow suit.