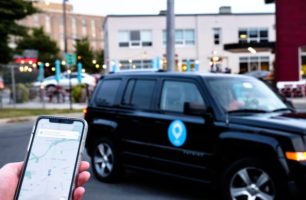 Johanna Hill, McCormick ’21, was initially very excited to move off campus this year. However, her newfound commute adds a lot of stress to her routine. “I need a ride to campus so that I don’t have to walk by my ex-boyfriend’s house,” claimed Hill.

Hill had planned to use Northwestern’s complimentary service, SafeRide, in order to get to class on time. Still, SafeRide is drastically different from last year now that the service has become privatized through Via.

“Before, trying to get a SafeRide was trying to catch a fly by its wings – you had to time it just right,” commented Josh Brown, Weinberg ’20, “Now, it’s like trying to shoot a basketball out of a helicopter onto Kylie Jenner on a jet ski.”

Regardless, Hill has just learned to plan ahead in terms of booking her rides. “Usually if I request my SafeRide at 10pm then it will get to my apartment by 7:55am and I can get to class only ten minutes late.”

Many others have followed Hill’s lead. “Sometimes I request the rides two days in advance,” mentioned Margot Crocker, McCormick ’20, “if they end up coming in less than 48 hours then I usually just shower and sleep in Mudd before going to class.”

Others have come up with their own strategies. “My roommate and I got matching unicycles,” stated Bart Hopkins, SoC ’21. “We don’t know how to ride them, but holding them and walking from our apartment in Skokie is faster than waiting for a SafeRide.”

“I just bought a horse,” claimed Mary Ringwald, SESP ’19. “It’s an expensive investment, but it’s worth it so I can get to class on time.”