“If you can read, you can do research” Posters Around Campus Discriminate Against Illiterates 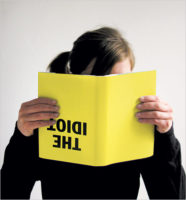 “If you can read, you can do research” posters around campus have been accused of discriminating against illiterates.

“I was walking back from English 105: Sounds of Words, and I saw the poster.” NU senior Gerald Harrington III said. “I recognized the symbols on it as letters. I took the time to sound out the words: ‘If you can read, you can do research.’ I was like, bra, these posters discriminate against illiterates. You know, I can sound out words ‘cause of English 105, but for some NU students, this poster is like a punch in the balls. It’s not a PC at all, bra.”

After hearing Harrington’s story, we reached out to the white cis literate male ASG Diversity and Inclusion Chair, John Wordsworth. Furious, he exclaimed, “First ‘it’s okay to be white’ stickers now it’s the ‘it’s okay to be literate’ posters? How illiteratist can the administration be?”  Wordsworth then proceeded to go on a nonsensical rant that could not be deciphered by even the most literate.

Sara Johnson, a first-year Weinberg English-literate Poli-Sci major, caught wind of this “illiteratist” movement and angry reacted on Facebook “First the 2-year foreign language requirement, now these posters. I am fortunate that I went to a school that taught me to read. Unfortunately, that’s not the case for some people. The government needs to crack down on these posters.” She is now running for ASG president unopposed and will be interning for the Obama Foundation this summer.

President Morty Shapiro declined to make a comment about the posters. However, the next day the administration sent out a mass email, condoning them. “NUPD [full of literate officers] will be around campus taking down these illegal posters and will be engaging in academic probation to any student found posting anti-literate sentiments. In addition, here is a reminder of all the resources Northwestern provides: [There was nothing else in the email.]”

Update on Illiteratist Posters: Incriminating evidence was brought against Sara Johnson. A video caught her nailing the posters to bulletin boards around campus. When pressed for why she did it, Johnson stated she needed something to kick start her campaign as president of ASG.