Op-Ed: Disney Plus? More Like Lib-ney Plus: How The New Streaming Service Pushes The Liberal Agenda 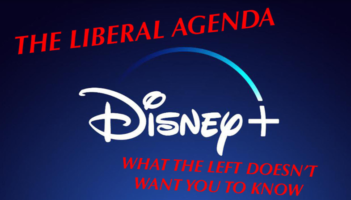 Liberals are taking over the streaming industry. I keep saying it, but no one will believe me! I’ve been willing to turn a blind eye to the occasional bit of liberal subtext, but now Disney has gone too far by introducing an entire streaming service dedicated solely to pushing their insidious liberal agenda. Disney Plus? More like Lib-ney Plus, am I right?

If you don’t believe me, simply take a look at any Disney Plus ad on the internet. What do you see? That’s right, an overwhelming amount of blue! The background is blue, the little arc thing over the logo is blue, everything is blue! And as everyone knows, blue is the color of the liberal Democratic Party! I find this completely unacceptable. Disney prides itself on being a “family friendly” company, but my Republican family and I would be very, very uncomfortable signing up for a streaming service without a pixel of red in sight! In fact, I think Disney could stand to take a page out of Netflix’s color palette – the hearty Republican red of the Netflix logo brings a powerful surge of conservative pride to my boomer heart.

Even worse, Disney is specifically creating content for their streaming service designed to push their liberal agenda onto the unsuspecting public. There has been plenty of excitement surrounding the new Star Wars show, The Mandalorian. But wait! Do you know what do you get when you rearrange the letters in THE MANDALORIAN? Yes, that’s right – AMORAL DEATH INN, which everyone knows is the liberal nickname for Congress whenever there is a Republican majority! Clearly, Disney is subliminally pushing for Democrat dominance in the House and the Senate, which would certainly upset the balance of power in our glorious United States. This is such an underhanded, devious move that I wish it weren’t true – but the undeniable proof is in front of my very eyes!

Yes, let me assure you, I will certainly not be getting Disney Plus – or, as I think it should be called, Lib-ney Plus! My money will not be going to support this ridiculous liberal agenda that Disney is clearly trying to force down society’s collective throat. For anyone else who has not yet been brainwashed by the left, I say – stand with me and speak with your money! When Disney realizes how badly they need our $6.99 per month, they will have no choice but to reconsider their blind devotion to the liberal agenda!