From the Archives: Y2K Poses Biggest Threat to Mankind in History 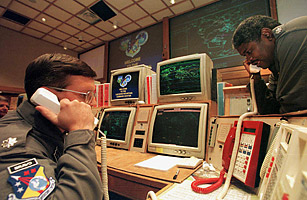 People all over the globe are bracing themselves for the apocalypse – all due to a programming issue. As computers are not prepared to switch to the year 2000 and risk a malfunction, many journalists and fearmongers claim that Y2K may pose the biggest threat to mankind in history.

“It’s like the apocalypse,” claimed Pamela Parsons, a local grocery store owner, “People are buying food that will definitely expire before they eat it. The supply chain will be fine, even if computers crash, so long as people only buy what they need.” Still, many are hoarding supplies in fear that cash registers, banks and other electronic means of currency exchange will crash.

“It’s scary how many people are buying guns right now,” said local policewoman Angela Jefferson. “What are they going to do? Shoot their computers into functioning?”

Nevertheless, not everyone was concerned with fixing the computers that humans depend on almost entirely. “I just don’t get why companies are investing millions of dollars into fixing the software,” said Graham Bloomberg, 88 years old. “Why don’t we just let all of the computers fail? I’m willing to lose all of my documents, memories and digital pornography if it means companies saving money that I will never see.”

Many companies have been advised to hire IT people to fix their computers. Still, some conservatives have attempted to undo the work of IT people in their companies. “All of these guidelines are unnecessary. No one is going to stop me from using glitchy software if I want to,” claimed one Fox News journalist, who does not back up any of his files.

However, many engineers and politicians claim that Y2K will not cause a disaster due to early preparation across sectors, including the Year 2000 Information and Readiness Disclosure Act. “We saw the signs of a situation that could have disastrous effects, so we did what we needed to do to fix it,” said President Bill Clinton at a press conference, “It’s the least we can do to avoid the biggest crisis our country, nah our world, will face this century. Americans in 2020 will be grateful.”