Local Sophomore Sexiles Self Just for the Nostalgia 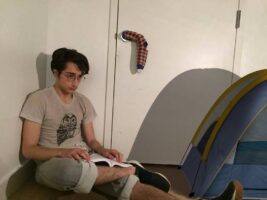 Weinberg Sophomore Sarah Tennant is not on campus this quarter, but she has found one way to bring a little bit of the college experience home: by forcing herself out of her room while her “roommate” has someone over.

“I realized that online classes and virtual hangouts with friends weren’t enough,” she said. “What I was really missing was awkwardly sitting in the dorm lounge trying not to think about my roommate and Kyle from Econ and what they’re doing five feet from my bed.”

Because she doesn’t have a roommate, and is instead staying at home this quarter, Sarah has taken to arranging hookups between her childhood stuffed animals. “Last week I had to do my homework in the living room because my Webkinz were having a Netflix and chill night,” she said. After she returned to her room, she had a passive aggressive conversation with her Webkin about how often she was inviting random Webkinz over. “It’s just like I’m in real college.”

While some students may be happy that their days of being sexiled are over, recreating the activity gives Sarah that warm, familiar feeling of sharing a room with someone you’ve known for three months, knowing every time they’re having sex, and knowing that it’s way more often than you are. “I can almost smell it when I come back to my room late at night. And by it, I mean Webkinz semen.”