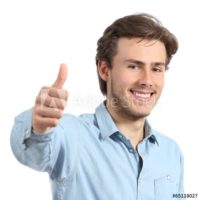 Twitter user funniest_memes_central has recently gained thousands of followers on his page dedicated to posting fresh and funny memes. Unfortunately, his fame might be going to his head, as the prospect of posting a face reveal had him a little too excited.

After gaining his 90,000th follower due to an image of a silly dog he posted (which went semi-viral with approximately 25k likes), funniest_memes_central tweeted out, “Thanks everybody! 10,000 more follows and I’ll do a face reveal!”

After three days, he posted a follow-up: “haha ok this is taking a while! 1000 more followers in the next 2 days and I’ll post a pic?” After failing to reach this goal, funniest_memes_central made a desperate final attempt: “if this post gets 500 likes I’ll post a FACE REVEAL!”

Though he once again failed to meet his overly-ambitious goal, funniest_memes_central just decided to go for it and post a picture of himself. After revealing himself as another generic white, male Twitter comedian, the user lost 20,000 of his followers in the next 24 hours.