Report: Everyone Definitely Noticed That Word You Mispronounced While Reading Aloud 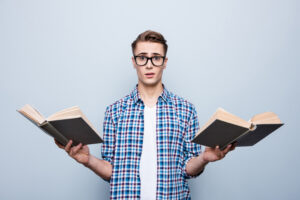 Much to the dismay of students everywhere, a new report from researchers has revealed that everyone definitely noticed that word you mispronounced while reading aloud.

Blake Simmons (WCAS ‘24) expressed his dismay upon hearing the news. “I was going to skip over it, but I figured more people would notice if I skipped it than if I just tried to plow through,” says Simmons. However, the new report actually found that 98% of students notice the mispronunciation, whereas only 97% of students notice skipping a word entirely.

“It wasn’t even a difficult word to pronounce,” Simmons admitted. “I just wasn’t prepared to be called on to read. I hate popcorn reading. I swear, I know that it’s definitely and not defiantly.”

Worried that his classmates would believe he was accepted solely for being a double legacy, Simmons felt a strong need to prove his literacy. Unfortunately, he continued to struggle through the paragraph after the initial accident—a common experience. In fact, the report also concluded that students who mispronounce words aloud are 75 times more likely to stumble on the words after.

New findings gather that the most effective way to recover from mispronunciation is to publicly apologize, effectively proving wrong older recovery strategies of laughing it off or awkwardly re-pronouncing the word.