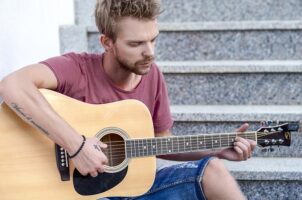 At approximately 6 o’clock last Friday, NUPD received a noise complaint from fraternity Phi Kappa Fugma about their neighboring frat. The caller seemed to think that the neighboring frat might be torturing some small animal or dragging a metal trash can across a chalkboard. But when police arrived on the scene, they found only Delta Gamma Delta member Chad Waterfalls and his acoustic guitar.

Upon investigation, the campus police determined that the heinous sound coming from the frat house was actually Brad’s seventh consecutive rendition of Wonderwall. When asked for a motive, Chad responded somberly, “no motive sir. Nothing motivates me now that she left me.” The police were then subjected to an hour long tangent about the futility of love, courtesy of Chad.

These incidents have become commonplace during house parties on campus. As hot girl summer turns to cuffing season, many white men have found themselves without a bae. Campus police have had to confiscate or outright destroy over 70 acoustic guitars in the name of aural preservation.

As for our friend Chad, Campus Police de-escalated the situation using 4Loko and a spare Hustler magazine. The guitar was confiscated and taken out back behind the frat house tobe humanely mercy killed.