“No, The COVID Swab Doesn’t Really Go Into Your Brain. Trust Me, I’d Know,” Says Local Man Once Abducted By Aliens 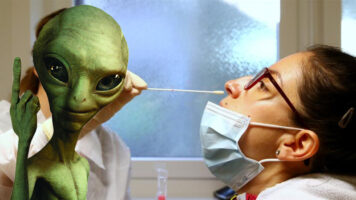 During a “socially distanced cocktail evening on the deck” last Friday night, Evanston neighbors Jim Cook and Bob Smith had to find something to talk about while their wives started a conversation based on genuine friendship.

Smith, knowing the two men had nothing in common beyond a generic liking of sports, decided to tell Cook about his upcoming COVID test. Little did Smith know that this inane conversation starter would prompt Cook to recount in painstaking detail the story of his alien abduction fifteen years ago on the shores of Lake Michigan.

“This huge spaceship blasting Wiggles music suddenly swooped out of the sky, and next thing I knew I was beamed up into their evil lab,” Cook reportedly told Smith while munching on cocktail weenies. “These aliens, their probes went up my nose directly into my brain, and sucked big pink chunks of it out into an examination tube. I actually only have half a brain now.”

Cook then explained how when he heard friends saying the COVID test felt like it went into your brain, he thought the aliens had returned to take him away for good. However, he soon discovered that the swabs only went in as far as his nose, and that the grumpy nurse administering his test was not in fact a murderous alien in disguise.

“So yeah. The swab doesn’t actually go into your brain, and it won’t suck your brain out either,” Cook reassured Smith as he concluded his story.

At a loss for words, Smith turned away from his neighbor to tune into their wives’ conversation instead. However, he would immediately regret that decision as he was forced to spend the next three hours discussing Sherwin-Williams paint colors.