Man With Truck Nuts Weighs in on Masculinity Discussion 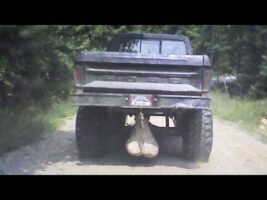 The appearance of Harry Styles in a dress on the cover of Vogue magazine sent shockwaves across the nation. Social media buzzed with discussions of masculinity and gender norms. Amidst this chaos, the American people find solace in the voices of experts. That is where Clint Jackson, owner of a pair of prosthetic privates tucked into his truck tailgate, enters the discussion.

Clint Jackson hails from Birmingham, Alabama and holds the prestigious title of “Most Anatomically Accurate Truck Nuts.” Naturally, he had some choice words regarding the former One Direction star’s dress. “It’s just not manly, real men are strong warriors! A man in a dress couldn’t protect his family!” said Jackson, perched atop his Rascal mobility scooter.

Jackson’s perspective may seem controversial, yet he has performed accomplished research on gender studies. While he has no college education, Jackson assured the Flipside that “colleges are leftist brainwashing institutions run by the deep state.” According to his sources, emasculating men is simply the next phase of the radical left’s plan to revive Marxism.

Whether or not skirts are a bastion of radical socialism remains to be seen. After all, when qualified experts with PhDs are pitted against people with Truck-sticles, it is hard to see who really has the upper-hand academically. Like any great philosopher, Jackson spends his time sharing his wisdom to all who will lend an ear, disseminating his thoughts by harassing minorities in the local Applebee’s restaurant.