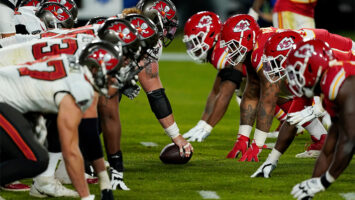 After receiving praise for the inaugural Super Bowl LV poetry reading, NFL executives scrambled for ways to capitalize on the positive publicity. Today, they seem to have found a way to do just that; an NFL press release announced three more artistic segments coming to the game in 2021.

One new segment is interpretative dance. Stadium workers have already expressed their skepticism: “That’s basically what the T-shirt cannon guy does in front of fans anyway!”

The press release also described a new expressionist painting segment, set to take place between the third and fourth quarters. Over the course of an hour, two professional artists will sit on the field and complete a ten-by-twelve inch painting apiece. Of course, the audience will barely be able to see the event, straining to see the pieces on the jumbotron.

“It’s like the Kiss Cam, but instead of shots of different couples, it’s just one really long shot of a painter fondling their paintbrush,” one NFL jumbotron operator said.

The artistic rollouts come amidst a heightened scrutiny on the NFL from social justice organizations. When asked if this public scrutiny prompted the Super Bowl’s artistic turn, NFL executive Bom Trady said, “People started calling us performative. And I said ya know what, if you’re going to call us performative, we might as well lean into it. We’ll have not one, not two, but five performances. Take that, snowflakes!