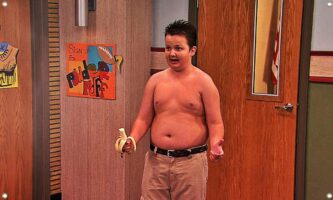 Parents across America were horrified to discover last week that Netflix has included the Nickelodeon sitcom iCarly in their February lineup, prompting a nationwide increase in ridiculous pranks and tween hijinks.

“We just wanted to give the kids a nice Valentine’s gift!” Tweeted Netflix executive Meadie Oaker.

Tweens rewatching the show have been particularly inspired by the antics of the intrepid Gibby Gibson, a character known, among other things, for taking off his shirt and yelling “Gibb-ay!”

A #shirtlessGibby trend has gone viral on TikTok with tweens imitating this war cry in varying degrees of undress and sweatiness. The trend has become so popular, some Gen Z scholars have even dubbed it “the next planking.”

The number of toe-stuck-in-bath-faucet-related injuries has also increased by nearly 400% since the show’s re-release, imitating an episode where the main character Carly faces such a problem.

But it isn’t these small slip-ups causing the most controversy. Several tweens have tragically died of gastronomic shock this weekend after consuming an overabundance of spaghetti tacos, a featured dish on the show. There has also been a sharp rise in maiming and other serious injuries from “butter sock” bludgeonings, inspired by character Sam Puckett’s vicious swinging of the weapon.

These iTragedies have caused Northwestern administration to take iCarly seriously as a security threat to campus. Residential Services even took the unprecedented action of adding “butter sock” to the banned items list for dorms, alongside wall tapestries and electric kettles.

“We know it’s drastic, and some members of the Wildcat community will not agree with this contentious decision,” administration said in an email. “However, we take the safety of our students very seriously here. There will be no ‘Gibbying’ as far as we can help it.”