Bummer! Meet Cute Goes Wrong When Both People Are Ugly 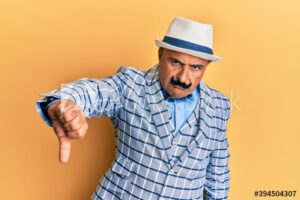 On Saturday morning, a “Meet Cute” went wrong when both people turned out to be ugly. Jim Jones and Lily Nolan met the same way so many love stories begin – while reaching for the same coffee order – but the love story ended when they were immediately disappointed by one another’s unattractiveness.

“I expected HER to be attractive, so it would be fine that I wasn’t,” said Jones, adjusting his fedora and twirling his handlebar mustache. “Usually the girls are prettier than the guys in relationships anyway, right?”

Unfortunately for Jones, his date’s eleven-inch fingernails painted to look like corn were not a conventionally attractive feature. “It was definitely uncomfortable to brush only her fingernails and not her hands when we both reached for the cup,” said Jones. “Super strange texture.”

We also spoke with Nolan, who was equally as disappointed by the interaction. “His mustache kept shedding into his coffee,” said Nolan. “And he kept pointing out that ‘mustache’ was spelled with an o, like ‘moustache.’ I didn’t really get it.”

The blame can’t be put entirely on Jones and Nolan. Part of the problem was the setting, as they met in a gas station Dunkin’ Donuts. We can only hope they pick a more suitable location for future meet cutes, and lower their expectations a little. Or, more realistically, a lot.