Local Date Says His Favorite Movie Is The Zapruder film 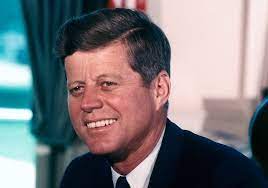 A table-for-two at Evanston’s own “Stacked and Folded” was left a solo party last weekend after a date gone awry. The missing party, Jackie Lyndon, was later tracked down while speed walking back to her dorm and asked for comment.

“I mean, he seemed nice,” stated Jackie. “We met in a poli sci class, and he seemed so smart. We had a lot in common too, like how we’re both from Dallas and have big families. He also drives a really nice car; I think he said it was a 1961 Lincoln!”

However, it wasn’t until the date began that Jackie began to notice a few red flags.

“He kept going on and on about these weird conspiracy theories. I think he mentioned Marilyn Monroe and something about a Tray of Pigs at one point? I tried to ask him normal first date questions, but he managed to answer them all in the creepiest way possible.” Jackie began to speed up her walking at this time.

“He literally said his favorite movie was the Zapruder film! I had no idea what that was, so I excused myself to head to the bathroom to Google it and dipped as soon as I found out what it was. What a freak!”

Jackie’s date, later identified as Bentley H. Oswald, could not be reached for comment.