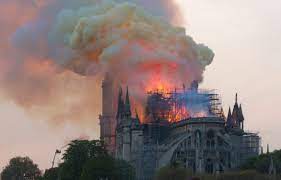 As it turns out – you can fight fire with fire. After reporting a potentially dangerous electrical issue, Evanston apartment residents returned on Saturday morning to a pile of rubble: a pile that had been quickly and efficiently rid of all dangerous electrical issues. The previously not-burnt-down apartment complex, owned by Gene Johnston of “Shambles Properties,” had a host of structural flaws and regulation violations – but in just one morning, Johnston’s property was cleared of every problem it ever had.

Johnston reflected that it’s quite a boost for her image. The fire makes her one of the most responsible landlords in Evanston, having resolved the fire hazard, improved the heating and ventilation, and exposed valuable new grounds on which a home may one day be built.

“Yeah, they told me the heater didn’t work because of some kind of gas leak. In my opinion, the kids we rent to these days are pretty entitled,” Johnston commented, stepping over a flaming support beam. “When I’m cold at home, I just put on a sweater. And when I’m hot, I fan myself with a nice, thick stack of Benjamins.”

Though described as “entitled,” by Johnston, residents of Shambles felt that the costless renovations from the fire were a pleasant surprise. “I think it looks a lot nicer. Something about the openness of the horizon,” commented Keith Cranberry Muffin, resident, as he took his clothes off. “Excuse me. I’m going to enjoy my new mold-free shower.”