Ancestral Ojibwe Call for End of Land Acknowledgements: “We Don’t Want Anything to Do With This Football Team.” 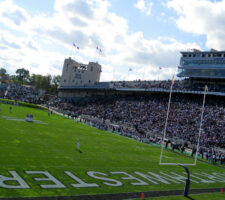 After Northwestern’s humiliating loss to Southern Illinois University, the Ojibwe—no longer wanting to associate with such an embarrassment of a football team—pulled out from their weekly game-time land acknowledgment.

A land acknowledgement, recognizing the ancestral land upon which a particular activity or sports event takes place, is typically conducted at halftime during Northwestern football games. Vice President and Associate Provost for Diversity and Inclusion and Chief Diversity Officer Dr. Robin Coleman spoke out regarding the confusing omission at Saturday’s game.

“A lot of people think that we were trying to show disrespect to the Ojibwe or Potawatomi people,” Coleman said. “If anything, they disrespected us.”

Following the backlash, the Ojibwe community put out a statement explaining why they opted out of their acknowledgement during the Miami University of Ohio game.

“We found the performance by Northwestern Football to be incredibly offensive,” the statement read. “Our people have been living, forming communities, and leading complete lives on this land for thousands of years. To see Northwestern football literally fumble this opportunity was upsetting.”

“The Northwestern performance is not something we want to associate with our ancient tradition,” it finished. “That being said, we’d be happy to continue land acknowledgements for the marching band.”