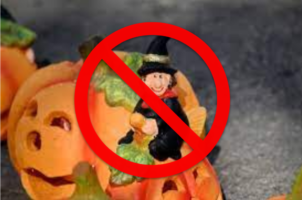 1. Bi Girl and Her Gamer Boyfriend

She’s had the sexual awakening, bought the sage green bedspread, perfected the pride month eye makeup. Alas, there’s still a man by her side. If only Michael from physics hadn’t had such a killer jawline.

Halloween isn’t the only time for demons and ghosts – this tortured artist wrote his info five pages of semi-autobiographic drivel before dropping the screenwriting module. Bonus points if you bring extra copies to read to women at the function before attempting to seduce them beneath your Pulp Fiction poster.

3. Sexy Foucault (but only if you know who that is)

Because Marx is too easy. And if you do know who this is, props on skipping the Thursday parties to finish that one paper I didn’t even attempt to write.

Divest from YOUR morals tonight, as long as you stay north of Tech. Pro tip: crude oil makes for a fantastic waterproof eyeliner.

All the fake blood and body glitter in the world won’t get you a redemption shot at finding new roommates with better priority numbers. Have fun with your Plex pregame, though – I hear the whole building is soundproof.

Some of y’all have definitely been wearing the same Daphne costume for four years now, with a different Fred on your arm every time. Why not lean into the camp of man as accessory?

CURSE you, Brew Coffee Lab. Your hours are WILDLY inconsistent. You’re MUCH more expensive than Brewbike. You’re NOTHING like the quaint local business your name so clearly rips off. Your INTRIGUING, EXTENSIVE menu will NOT fool me. You’re EVERYTHING wrong with corporate America. Your MITSKI LATTES are frankly INSULTING. And fucking DELICIOUS.

Maybe more freshmen would have stood up in the identities TND if our host with the most had been wearing lingerie and some form of animal ears. Plus, nothing screams “spooky” like public vulnerability!

What sorcery brought the cliquish cohort back from the brink of despair? Zombies? Mind control? Dirty rushing? Bonus points if you wear this costume while walking by the house on Garnett where the entire former pledge class relocated in an eerie bloc.

No, we haven’t forgotten that only two short years ago, half of you were reposting Dance Marathon promo graphics while the other half were quite literally getting tear gassed on Halloween. Cops out of Northwestern!!