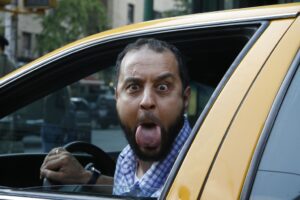 This past weekend, Brad Driver was pulled over after driving in two separate lanes for almost twenty miles. Once pulled over, Driver had the great idea of how to play off his terrible driving—by claiming he was under the influence of alcohol.

“You see, cops, they’re never really looking to arrest anyone—so you just gotta play it cool if you get approached by one,” Driver claimed, while sitting in a holding cell at the local police station.

After the officer pulled Driver over, who was in a Toyota minivan missing one of its rearview mirrors, Driver told him, “I was just a bit drunk, officer.” The officer was surprised, and used a breathalyzer on Driver.

“There was not an ounce of alcohol in his body. I don’t really know exactly what he was hoping to accomplish by telling me he was driving drunk,” the officer said.

The officer arrested Driver, Driver still smiling confidently, enamored with his own ingenious excuse for his terrible driving skill.

“No one will ever know that I am actually a pretty bad driver,” said Driver. I mean, it was the alcohol, you get it? I mean, what successful person has not at least once driven under the influence? And I wanna be successful, you know?”

Driver faces up to 1 year in jail for reckless driving and a fine of over $2,000.