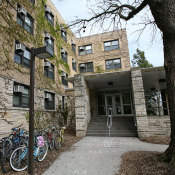 Dan Rivers, WCAS ’18, and John Rice, MEAS ’18, freshman roommates, were seen holding each other in what can only be described as a bromantic embrace as they tried to describe what had gone down.

EVANSTON—WCAS junior Jason Rivers has received many text messages since he purchased an iPhone two years ago, but none stranger than the one he received during his Organic Chemistry class last Tuesday. “WHADDUP NORTHWESTERRRRRRN!” the message read. “Thers a dudewith a gunn n shit so watchouttt.” Rivers, like many other NU students, has been victimized by NU Emergency Notifications, an automated voice designed to help keep students aware of developing emergencies on campus. On Tuesday, the voice had apparently downed

Ask The Flipside – Why Don’t You Have Any Articles Regarding Women?

Dear The Northwestern Flipside, Why don’t you have any “Area Woman” articles? It seems like you only ever write articles about men. Sincerely, Sheila Von Ontario Dear Sheila, The main reason that the Flipside is so testosterone-fueled is that women rarely do anything stupid enough for us to bother writing articles about them. It’s so much easier to make up funny stories about some drunken dude’s escapades than it is to find humor in cooking and cleaning. I mean, look