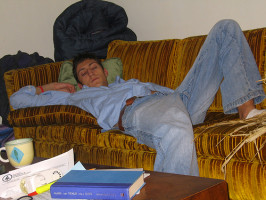 EVANSTON – Homeless NU student Peter Soren, recently evicted due to the enforcement of Evanston’s so called “brothel law,” has reportedly been seen frequently sleeping over at an apartment rented by three of his friends. “He just sleeps in our spare bedroom,” explained Brandon Burrell, one of the three tenants. “Sometimes it seems like he sleeps over every day.”

Soren, who had previous lived in the apartment before the enforcement of the law, says he is glad to have such hospitable friends. “I had a real scare for a while, but it looks like I’ve finally settled in and found a place to live– er, sleep at sometimes.” Soren has been seen giving random checks to Burrell about once a month. “I just like to be a nice guy,” explained the WCAS junior. “He’s really into giving me gifts,” added Burrell, “especially on the first of the month. Funny the way that works out.”

Soren sleeps over so frequently that he apparently leaves things lying around when he departs in the morning. “I just completely left my desk lamp there the other day. And my printer! I don’t even know why I brought it in the first place, but, um, oops,” he lamented, “I’m just so forgetful sometimes.”

Burrell explained that he accidentally forgot his keys on the counter when he left one morning. “Oh, crap,” he told the Flipside, “totally forgot my keys. Hope someone picks them up—oh wait, here’s a text from Pete. He found them and will drop them off today. He’s such a considerate guest.”

Since the enforcement of the law, the number of off-campus slumber parties has risen by 200%. “I think it has something to do with those hipsters,” explained NU President Morton Schapiro, “they’re really into that whole retro thing. I guess seventh-grade is in right now.”