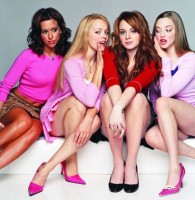 EVANSTON – The whole social order of Northshore Middle School changed dramatically the day Susie Donalds got her braces. She had apparently been keeping her impending defacement a secret, so it came as quite a shock to her former “bffeaeae” (translated from 7th grade speak, this means “best friends forever and ever and ever”), members of the “Fab 5” clique Tiffany, Brittany, Barbie and Kelly.

“We just, like, didn’t know what to do,” clique leader Tiffany told us. “It was like BAM! Brace-face! It’s just sooooooooo gross.”

“What were we supposed to do?” Barbie whined. “Just let her stay friends with us and risk all of our reputations? Not a chance in heck!”

Susie, due to the emotional and physical pains of having braces, couldn’t be reached for comment. However, according to the testimony of her little brother Joey, she was apparently not surprised about being kicked out of her group of friends.

“The Fab 5, well now Fab 4, is made up of only the best. And braces just don’t make you the best.” Tiffany told us.

Rumors have been circulating that Kelly, too, will become a metal-mouth in the near future, but she is working hard to dispel such nasty gossip. “My dad totally wants me to have them, but I’m like no way! I’ll get those invisible things next summer when all my friends go to camp. I will not end up like Susie.”

At press time, Susie had still not returned to school after a dramatic incident where she had to return her “BFF” necklace that the Fab 5 all used to wear. Tiffany is currently on the lookout for a fifth member to add, but is having difficulty as “like, SOOOOO many people have braces. Ick!”