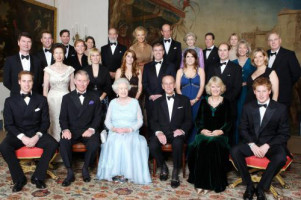 Why Do Brits Love Their Royal Family?

Seems I can’t take three steps these days without someone running their yap about the royal wedding. It could just be that I consider myself a true American, with apple pie in my gut and cholesterol in my veins, but I have a truly difficult time giving any sort of a flying fuck about this wedding. Hell, I can’t even stand weddings for people I know, but for whatever reason Brits and Americans have come together to make this the Anglo-Saxon event of the year, at least until Keith Richards’s funeral (seriously, it can’t be much longer now).

Some people have told me they’re watching it for the “red carpet” beforehand; a parade of inbred dukes and earls who may be unaccustomed to daylight, but are quite confident in the fact that they’re better than you. And yes, Prince William may be one of the “good ones”, but let’s not forget brother Harry, the Nazi-dressing, Pakistani-bashing prince. He may seem more redneck than royalty, but remember, folks, there’s about equal levels of inbreeding and incest in both.

And the Brits eat this shit up! They pamper these freaks, getting nothing in return, but rather than go all Bastille Day on their asses, they giggle merrily and talk about how “romantic” it all is! The only question I can ask is: why?

I Dunno, Why Do You Jews Love Circumcision?

By Harry, Prince of Wales

Believe it or not, tradition counts for something, right? People try to uphold the ideals that their parents and ancestors held dear, and even fought for, but maybe you’re on to something. Maybe the monarchy is just a vestigial tail on the body of Britain, and it’s time to slice ‘er up like a Jewish wang. Keep in mind, I never asked to be prince! Why do you think I’ve tried so hard to make the public hate me? Two years ago, I called one of my Pakistani soldiers a “raghead”, and now I’m a bloody Captain? They actually let me fly an Apache, despite my record as a pot-head, all because it reminds them of my grand-daddy!

You love to rag on us whenever we mess up, and maybe we haven’t had the proper exposure to other cultures, but you really can’t blame us for that! After our mom passed on, it was you people who tried so hard to keep my siblings and I sheltered, but then we were sprung onto the scene without any sort of real preparation! I didn’t even have my own press secretary until I was sixteen! How could you expect me to not smoke pot and dress like a Nazi?

So, no, I can’t tell you why they love us, but who are you to go around telling people what they can or can’t enjoy? You vulgar American; it’s so easy for you to judge while you go around lopping dicks off. Fuckin’ savage; you make me sick.

Terribly sorry, just had to get that off my chest.