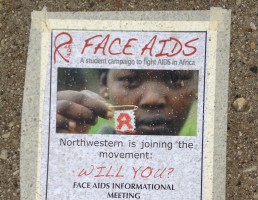 ATLANTA, EVANSTON, and DES MOINES — An anonymous Northwestern student-watchdog group has alerted the Centers for Disease Control (CDC) about a potentially deadly disease called “Face AIDS.” According to the a statement from the CDC, the previously unknown disease has in the last month spread all over the Northwestern campus.

Little is known about the disease, but already an awareness campaign has started in the form of flyers around the campus, prompting the CDC to advise: “At this point, there is insufficient evidence to determine whether this is a mutation of the AIDS virus that has become faceborne, or if this is another virus altogether. What we do know is that more than a few flyers will be necessary to take down Face AIDS.”

Flyers about Face AIDS were placed by the newly-created student group “Face Face AIDS,” whose mission statement is “To make so many people aware of Face AIDS, that it gets really shy and embarrassed and just disappears.”

“It’s like those pink ribbons you see,” elaborated Face Face AIDS founder Steve Joplin. “If enough people see pink ribbons, and know that breast cancer exists, then breast cancer simply disappears because it gets very self-conscious that so many people know about it. We’re just hoping to do the same for Face AIDS.”

The Face Face AIDS group’s efforts have already been successful. Due to the proliferation of “Face AIDS” signs at Northwestern University, President Obama pledged to eradicate the Face AIDS plight from the United States.

“Face AIDS is a serious problem,” President Obama said at a stump speech in Iowa earlier this week, pointing out that his comprehensive healthcare overhaul covered Face AIDS.

“While I’ve been at the forefront of the Face AIDS epidemic, where has Governor Romney been?” the president asked. “That man is clearly out of touch with the issues that affect every day Americans.”

Warned Mr. Obama, “You can get them from kissing, hugging, or voting Republican.”