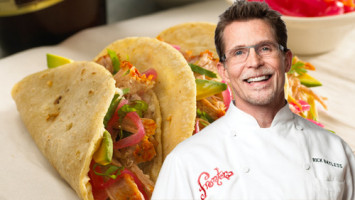 While the eatery’s nearly mythically slow completion led many students to believe it was managed by whoever put that equally mythical Einstein’s in (Tech? Pancoe? Is it even real?), it is, in fact, owned by Chicago chef and restaurateur Rick Bayless, who says he hopes to bring more upscale cuisine to Northwestern.

“I know it will be hard to compete with the gourmet hot dog options available at Tech Express,” Bayless told The Flipside, “but I think the use of fresh, locally-grown ingredients and very-nearly Mexican food options makes Frontera really unique.”

When further pressed on where “locally-grown” vegetables would be sourced from in an urban area, Bayless said he hadn’t thought it through all that well, but the most economical option was a small, cooperative farm manned by unemployed theater and communications majors.

ASG representatives were lucky enough to sample some of Frontera’s special dishes early at their annual “How to Spend Money on What Northwestern Doesn’t Need Dinner.”

“We thought it might be a challenge to come up with a worse idea than WiFi on the lakefill,” the ASG president told members, “but then the executive board and I had this great idea that we could use the 10K Initiative to bring in a Chipotle, and maybe even put it in that equally unnecessary new Bienen building? Or what about the new SPAC? That could be even worse!”

The yes-vote was unanimous.

As of press time only six non-ASG students had heard that Frontera Fresco had opened. While Global Studies major Harriet Myers was quick call the cuisine as “genuine as the Melville J. Herzowits Africana Studies Library [on the fifth floor of Main],” Weinberg sophomore and Nebraska native Haley Michaels said that not only does Frontera provide the corn fix she’s been missing, but that the new addition to NU Cuisine’s culinary diversity has really broadened her cultural horizons. “Like last year on Cinco de Mayo I had a tamale at Hinman, which was gross, but now I’ll definitely make sure my family my family tries ‘Taco the Town’ back in Omaha!”