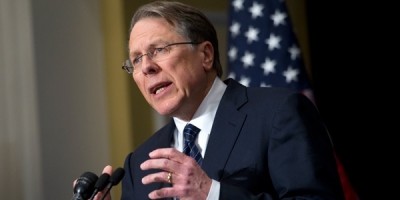 NASHVILLE, TN — NRA Executive Vice President/Walking Effigy Wayne LaPierre took to the stage today to thoroughly denounce the recent spate of “3D-printed” guns as irresponsible, deadly, and a major unchecked threat to the security of his end of year bonus.

Speaking to a rapt, ravenous audience of gun owners who seemingly didn’t have anywhere else to be on a Monday afternoon, LaPierre framed the plastic, largely-untraceable devices (which could become increasingly problematic as the price of 3D printers drop) as a violation of the NRA’s First Amendment rights:

“Citizens United established the right to corporate ‘money for free speech,’ and these new… Socialist, free guns could cut off the entire money supply to the protectors of your Second Amendment rights, from Smith & Wesson to Beretta! No money means no lobbying, and that is an unacceptable trampling of our First Amendment right to Free Speech! The Obama administration is at it again!” The audience erupted into a staggering chorus of hisses and boos.

“I don’t know about you,” LaPierre stated rhetorically, stepping away from his podium to be closer to his audience, “but if Obama thinks I’m going to give up the rights our forefathers sacrificed so much for, all the way back in 2010, he’s got another thing coming! Now, who’s with me?!?” Like steam bursting through a vent, the sheer magnitude of applause the final comment elicited forced several reporters in attendance to stagger backwards.

Although he successfully convinced the most enthusiastic members of his fan base that giving thousands of dollars to the NRA and and its sponsors was the only way to prevent Hitler’s return, LaPierre did face challenges from outside commentators who saw the free-to-download blueprints as the ultimate culmination of their belief in the Second Amendment.

“I SWEAR TO GOD,” LaPierre later bellowed in response to his critics, “if my salary with bonuses this year is less than 2.4 mil, I will SINGLE-HANDEDLY ensure gun control passes.”