Here’s How We Fix Northwestern Football, Part One: Ryan Field 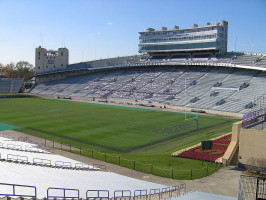 As a freshman, I’ve seen a season of Northwestern football in person. That’s all I need to know that we need to make some dramatic changes. Now, I’m not some sort of insider good-old-boys-club businessman who wants to keep with the status quo. Hell no. We need change. We need creativity. We need the terror of revelation.

Northwestern has the potential to be an amazing football program on par with Ohio State, or at least with Michigan. We have a good location; we have great coaching talent; we have good academics to sell to recruits. I truly believe that we can make Northwestern the pride of the Big Ten if we want. It’s only our apathy that condemns Northwestern to be the Vanderbilt of the Big Ten. Over the coming four weeks, I will explain how we can and will fix Northwestern football in four easy steps: revamping Ryan Field, refreshing our relationships with other teams, rethinking our approach to player and coach recruitment, and reconsidering our approach to game attendance.

This week, I’ll be looking at Ryan Field and how fixing it must be a priority if we want to be a serious football program.

To begin, Ryan Field’s location doesn’t make a lick of sense. What the hell, guys!?! We say we’re Chicago’s Big Ten team, and then we put our games in fucking Evanston. Huh? Who from Chicago is going to go up to Evanston to watch a football team lose? It’s hard enough for me to convince UChicago coeds to come up north for booty calls, much less convince Chicagoans to come up to watch a football team lose a game when they can hang out at the Field Museum and look at Sue the T-Rex. Have you seen her? Beautiful.

Tear down Ryan field and move it to Chicago. Build up something nice and fancy, all modern-like. I’m talking about leather chairs that can lean back to near-complete flatness. I’m talking about an excellent sound system and great acoustics, for reasons I’ll cover in future sections. I’m talking about strobe lighting capabilities. Let’s give it a secret tunnel to the Sears Tower, and a separate tunnel to the Willis Tower, wherever that is. Let’s take advantage of the Chi. Let’s just go nuts with it. I want Chicagoans to think of two things when they think of Ryan Field: convenience and luxury. Hell yes. We can afford it. We have a $7 billion endowment. Go Wildcats. Name it after William Jennings Bryan.