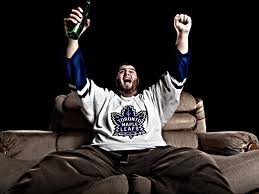 CHICAGO — New research released by Loyola University has caught the attention of sports enthusiasts across the country. According to renowned statistician Dr. Giovanni Velazquez, a startling 98.4% of all American viewers of the NHL playoffs are only watching in hope of seeing a fight. His findings show that this brief sports playoff event, known to fans as April Anger, is watched by Americans primarily as a less-scripted alternative to professional wrestling.

While Americans have claim to March Madness, May Mayhem, February Fever, and July Jaundice, April Anger is the pride and joy of every self-respecting Canadian. However, in recent years, this brief stretch of Canadian contribution to global society has become flooded with American viewers and “fans.” These American newcomers to the hockey world appear to be harmless, but the results published by Dr. Velazquez suggest differently.

“Look, these people spend the rest of the sporting year watching travesties like American football and professional basketball,” Dr. Velazquez warned in a press conference. “You have to figure out their intentions before you can approach them. Are they wearing a Blackhawks jersey in Atlanta? You have to watch out for stuff like that.”

In his experiments, Velazquez placed a group of subjects in a closed room with a cluster of reclining chairs and a single plasma television showing an arbitrary hockey game. Individuals were monitored in terms of visible excitement levels in relation to the activity of the players. Afterwards, they were asked a series of questions relating to specific moments in the game and asked to recount their favorite parts.

“No one cared about anything except the fights. These American hockey ‘fans’ are a prototypical example of the most dangerous variety of spectator,” Velazquez told the crowd of nervous Canadians. “All pure-blooded fans should proceed with caution in the presence of their southern neighbors.”