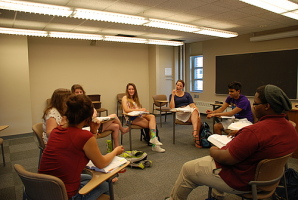 EVANSTON — In what can only be described as a shocking display of intelligence and enthusiasm, Northwestern football player Evan Rudolf broke his silence and contributed a thoughtful and well-supported comment in a discussion section for his Intro to American History lecture last Tuesday.

Graduate student and TA Lazlo Emerson was in the process of leading a lighthearted discussion about the European desecration of the Native American lifestyle. Only ten minutes in, he saw an oversized and unfamiliar hand go up in the back corner. He was aghast to discover that it belonged to Rudolf, a student whom he had previously thought mute.

“Evan had never spoken before. In fact, last week I wasn’t sure if he was still alive until one of his teammates made a derogatory joke about women and Evan gave a half chuckle,” Emerson recounted. “This week, he gave such an outstanding insight into our topic that I immediately felt guilty about all of the times I devalued his academic worth.”

Classmates were equally shocked at Rudolf’s sudden and drastic choice to participate. Several of them described him as “quiet,” “withdrawn,” and “super hot and probably amaaaaazing [sic] in bed.”

When asked to repeat his statements on the plight of the Native American tribes of the eastern seaboard, Rudolf muttered, “I don’t know, don’t you think killing them was, like, y’know, bad or something?”