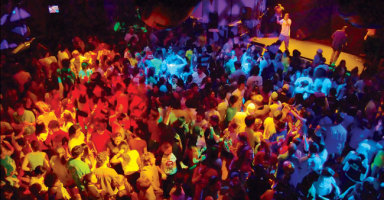 EVANSTON — Today, the Dance Marathon Committee announced a new requirement of a clean drug test from all participants. This comes on the heels of recent allegations of performance enhancing drug use by several brothers of Tappa Tappa Keg. DM officials are investigating the serious possibility that last year’s complete absence of fainting frat bros was due to the use of blood doping and steroids.

Investigators first became suspicious after a contingent of Tappa Tappa Keg members continued dancing several hours after the marathon was supposed to have concluded last year. Beck Carter, Medill ’15, explained at the time, “It’s a marathon. We’ll stop when we’ve danced all 26.2 miles.” He and three unidentified teammates then continued dancing enthusiastically to the “Cupid Shuffle.”

Dr. Nancy Narchund, the head drug investigator at the Searle Student Health Center, declined to comment. However, sources speaking on the condition of anonymity reported that several of the young men’s urine samples contained an excess of testosterone, as well as horse tranquilizers.

Gabe Cudgel, WCAS ’16, claimed, “I took no different drugs than I usually do. I’m not taking them to improve my dancing, just to help my appetite or glaucoma or whatever.” When pressed on the urine test in question, he accused a rival fraternity of tampering with the results.

While the official decision has yet to be passed down, the addition of mandatory drug testing does imply a level of guilt. This comes as the latest in a string of issues for the University, following allegations of insubordination by the football team after they poured Gatorade on Coach Pat Fitzgerald.