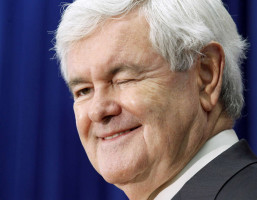 EVANSTON – According to multiple sources, Evanston Mayor Elizabeth Tisdahl and former Speaker of the House Newt Gingrich have matched on Tinder.

Mayor Tisdahl explained her decision to swipe right by stating, “I know that we don’t exactly agree ideologically but who can say no to that pudgy little face. He’s like the Pillsbury Doughboy. I just want to poke him and watch him giggle.”

She elaborated, “I know that Newt doesn’t have the best history of respecting his sexual partners. Hillary might give me some shit for it when she comes to town. But she’s married to Bill so let’s be honest: she doesn’t have too much speaking room.”

When asked about what he found attractive in Mayor Tisdahl, Gingrich said, “I know that I divorced my first wife because she wasn’t young or beautiful enough but my tastes have changed. With age, I now see the value in a nice older woman and what can I say? The mayor’s librarian style just greases up my old, rusty gears if you know what I mean.”

Gingrich, who famously asked his second wife for an open marriage, stated, “luckily, my third wife was kind enough to let me make an account on Grindr. Wait, is that where I met Elizabeth? I always get Tinder and Grindr mixed up.”

As a fundraiser for some organization in which both Gingrich and Tisdahl have an interest, tickets to be a third wheel on their date are being sold for $2700.