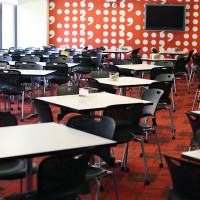 EVANSTON — Northwestern’s Residence Hall Association released an announcement today that both Plex West and Plex East will receive new wallpaper. Both dining halls currently feature walls exclusively dedicated to commas and semicolons, but will soon include more diverse punctuation such as tildes and umlauts.

“I am thrilled that the Foster-Walker Complex has decided to display the punctuation of other languages,” said German exchange student Adolf Schmidt. “I’ve felt uncomfortable living here for the past four months without seeing any of the diacritics that I’m used to from home.”

While the new wallpaper will include punctuation and diacritic from all over the world, the RHA stressed that the beloved periods, often mistaken for polka dots, will still have a meaningful presence.

Freshman Sami Davis couldn’t be more enthusiastic about the change. “I feel like I absorbed so much knowledge about grammar during fall quarter just by sitting in Plex. Adding all these new symbols will just make me that much smarter and more worldly!”

The RHA also noted that they have warned all dining hall workers about the increased possibility of complaints from Grammar Nazis who claim to find flaws in the new decoration.