STUDY: Everyone but You Rushing 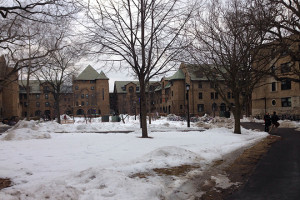 EVANSTON – A recent study by the Northwestern University Department of Classics shows that everyone but you is rushing. The study reveals that all of your friends are currently planning on joining a Fraternity or Sorority. Their reasons, according to the study, is that they want to join the Greek society in order to better connect with other people and form long-lasting friendships.

The director of the study, Dr. Franklin Rat, was surprised by the results. “I mean, given the fact that rush is one of the biggest things on campus, you would think that everyone would have joined.” The reasons for you not rushing, reported Dr. Rat, is a mixture of your disdain of the Greek system and your belief that not all of your friends would be rushing.

Attempts at finding anyone other in your class who isn’t rushing have been fruitless, as the study shows that everyone plans on going Greek sometime during their four years at Northwestern.

According to representatives from both the Interfraternity Council and the Panhellenic Association have to wait until next year if you want to rush, although for the next year you will be subjected to hearing your friends make inside jokes with other Greek friends and slowly forget about you.