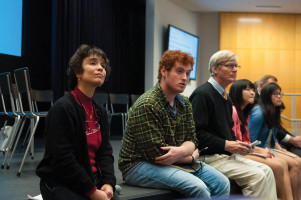 EVANSTON – After minutes of deliberation and careful consideration, the Northwestern Task Force assigned to evaluate the academic calendar finally announced their recommendation: a 174 one-day quarter system. Elaborating on the report, the task force stated, “We listened to Northwestern students and really tried to get in tune with their thoughts and feelings. What we kept hearing was ‘We need shorter quarters. Yes. Shorter and more numerous.’”

Overall, the reception of the announcement has been positive. Mellissa Aarons, WCAS ’18, prospective octuple major and the only student who responded to the Flipside’s poll confirmed, “I’m already envisioning my morning routine. Wake up. Take a midterm. Brush my teeth, take a midterm. Shower. Take a midterm. And, unlike the regular quarter system where finals end hours before nightfall, the new finals will start so late that you can go directly to crying yourself to sleep once you finish! No waiting! Ultimately,” Mellissa added, “students just really love a good midterm before breakfast.”

Of course, the task force has planned more than midterms and finals into the academic year. According to them, “[Student’s] Schedules will be jam-packed with excitement. Reading Minute will be a great time for students to relax before finals and Dillo Second (DS) is not only a great event students can enjoy but also defines a new unit quantum physicists can use to describe small time-scales.” When asked to expand on the new plan, the task force stated, “While it may seem so, we do not intend to sacrifice quality for quantity. There’s no reason tuition per quarter should be scaled back.”

Nevertheless, the new plan does face some criticism. Parents fear that students will return home speaking incomprehensibly fast and moving at speeds unnatural for living beings. Engineers, however, were confused. Chelsea Müller, MEAS‘19 was asked about her perspective on the 174 quarter plan and she simply responded, “Wait, what? Hasn’t the schedule always been like this?”

At press time, the majority of Northwestern students were attempting to figure out how they could possibly fit an internship into the new calendar.