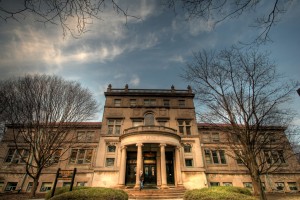 EVANSTON – Earlier today, the Northwestern mathematics department revealed that, due to budget shortfalls, funding for both mathematics research and mathematicians themselves would be cut. So far, two professors have been laid off and the faculty has found their numbers dwindling.

Northwestern President Morton Schapiro was pressed for comment regarding for his controversial decision. “Am I worried this’ll have a negative impact on the math department? Nah. It’s mathematics research. What do they need funding for? Graphing paper?” However, when reminded that the extreme budget cuts also forces the department to lay off highly-seasoned professors, he became serious. “These are hard economic times for all of us,” he solemnly recounted, “and with our students paying a dirt-cheap $70,000 per year, we need to make sacrifices. While you might forgo that costly cable subscription and settle with simple Netflix, Northwestern University has decided to forgo some of our world class mathematics faculty and settle with typing our math questions into Wolfram Alpha instead.”

A new student run organization, “Mavericks for Mathematics” was formed under the slogan “Save the Mathematicians.” Explaining his motivation to save the mathematicians, Mavericks for Mathematics president Robert Simons stated, “Our world is filled with skepticism, confusion and mistrust. Yet, these noble mathematicians have avoided it entirely, opting to live life in an abstract world free of corruption and shielded by the mighty ivory towers. These professors, nay beacons of innocence, must remain unsullied of the cruelty of reality.”

Attempts were made to reach out to the two laid off professors to get their take on the budget issue. Both have reportedly purchased beachside mansions in California and gone into consulting. However they are also both unavailable for comment since none of our requests for an interview were able to circumvent the $500 hourly consultation fee.