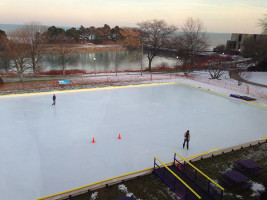 EVANSTON – After an unfortunate injury experienced by Luke Carlson, WCAS ’19, at the Norris ice rink last week, the ongoing and contentious debate regarding safe spaces on campus has shifted focus to the seasonal leisure spot.

“It was a surreal moment,” Carlson said. “One minute there I was, skating with my girlfriend, with two functional arms, and then, bam. One functional arm. Just like that.”

After paramedics arrived to whisk Carlson off to the hospital, Norris staff made the decision to shut down the rink indefinitely.

“We felt that that was the best course of action,” Norris Outdoors Program Coordinator Helen Lewis said. “We have a responsibility to our students to expand their safe spaces, and it’s obvious that the skating rink is no longer a safe space.”

“It wasn’t just the broken bone,” Carlson said, “or the fact that my girlfriend broke up with me because I cried ‘way too much’ after it happened. It just felt like I wasn’t welcome, you know? Like that ice rink was tokenizing me.”

Norris Outdoors declined to comment on these criticisms, as well as allegations from CRU that the unseasonal warmth in recent days is a sign of God’s judgment on the ice rink’s lack of sensitivity.