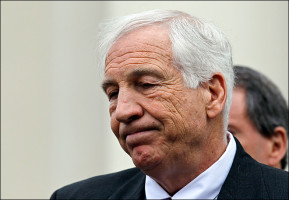 EVANSTON — Members of the Northwestern community were shocked last week to discover that famed pederast Jerry Sandusky had been relieved of a position on the force of the NUPD that he had apparently held for several years.

Sandusky, who was famously embroiled in scandal at the end of his tenure as an assistant football coach at Penn State, was fired amid accusations of behaviors similar to those that had previously landed him in hot water. “Mr. Sandusky came to us with a well documented and longstanding set of vices which had prompted his departure from a previous position,” read the official press release posted on the NUPD website. “Recently, these behaviors began to recur, prompting the termination of Mr. Sandusky’s employment.”

This statement, as well as the initial fact of Sandusky’s apparent hiring, has inspired a wave of outrage and ridicule. “There’s just so many separate problems with this situation,” explained Jessica Peterson, Medill ’17. “This is a man who undoubtedly committed a series of heinous, heinous crimes. Also, what qualifies him to be a cop? I’m incredibly, incredibly confused by this whole story.”

A small minority have expressed a more positive opinion on the embattled former coach, including Tom Johnson, WCAS ‘19. “I’ll miss hanging out with Jerry,” said Johnson, who regularly gets offered the under-twelve menu at IHOP. “He was the kind of guy who made you feel special.”