Hillary Leaves Burnt Offering on the Tomb of Reagan 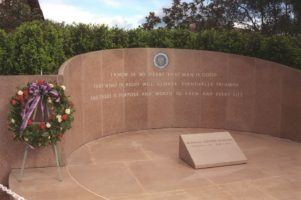 RONALD REAGAN PRESIDENTIAL LIBRARY – Hoping for that little extra help from the gods of politics, Hillary Clinton was seen leaving a burnt offering on the tomb of deceased actor, creative economist, and minor politician Ronald Reagan.

The ritual seems to have been in anticipation of her acceptance speech tonight at the Democratic National Convention, drawing from Leviticus to make sure that it was offered in precisely the right way—even if not getting the spirit of the laws. As she prepared the ashes of a male sheep sacrificed for the occasion, she seemed to have been uttering an incantation for Reagan’s uncanny luck and appeal to blue-collar white voters.

“We wanted to make sure Hillary would be able to exude some small amount of charisma,” said Clinton campaign manager Robby Mook. “We don’t want her to be upstaged by any of the natural politicians who spoke on previous nights.” It has often been noted that Hillary is “likeable enough,” but struggles to inspire people with the shameless optimism and charm of Reagan.

When asked to comment about Reagan’s uncanny ability to avoid being damaged by self-inflicted political scandal, Clinton gave a murderous look.