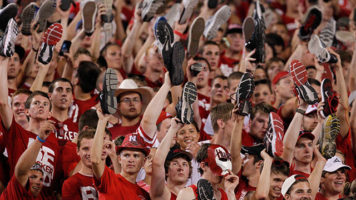 “This is outrageous,” said Nebraska graduate Larry Johnson. “I wasn’t allowed to take in my lucky ear of corn because I couldn’t fit it into a clear plastic bag. I don’t know about you, but it sure doesn’t look dangerous to me.”

“Our policy is very clear, and the Nebraska athletic department made sure to warn their fans in advance,” said facilities manager Jeanine Tolentino. “Our staff has nothing to apologize for.” She went on, “We have a rule of thumb that people have found helpful: ‘If it doesn’t fit, leave it at home.’”

Johnson decided to forfeit his corn to event staff in order to enter the game, but a substantial contingent of visiting fans waiting in line behind him did little to hide their displeasure.

“I don’t blame him for being upset,” said fellow Husker fan Kelly Schuster. “You never know when you might need that corn. Maybe you want a halftime snack. Maybe you want to give it to a lady. Maybe the ref blows a call and you need to throw something at him.”

“Or you might need it to hit somebody,” added Schuster’s sister LeAnn. “Chicago’s a dangerous city. This place is filled with crime and foreigners and Democrats. You have to come prepared.”

Johnson will never be reunited with his corn—NUPD reported that the confiscated vegetable had been incinerated for security reasons, though it’s likely that it was destroyed with more prejudice following Nebraska fans’ tweets calling Tolentino a “clear plastic hag.”