Trump Bumps “Debates” Up List of Democratic Institutions to Destroy 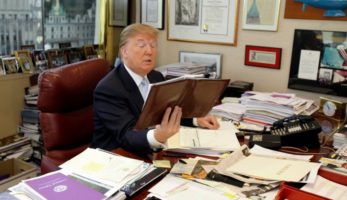 Following what pundits have been calling a lackluster performance at the first Presidential Debate last night, Republican candidate and real estate mogul Donald J. Trump has decided to abandon his usual strategy of putting his hands over his ears and lying louder. His new plan is to move “debates” up the metastasizing list of democratic institutions that he wants to destroy.

Blaming an unfair system rigged by the nation’s 240-year tradition of majoritarian democracy, Mr. Trump has decided to move “debates” from their current place beneath “taxes.” It will now take the much coveted spot above “civil rights” on the list of American political entities to be irreparably damaged. The list was leaked to the press earlier this evening by a campaign staffer, who claimed not to have gotten paid for the past two months. It contains over twenty entries, including “the Republican Party” and “the truth,” which have already been crossed off. According to campaign manager and designated adult Kellyanne Conway, the list was meant to be “an exercise for organizing his goals,” but that it was “definitely not” a hit list.

While he has achieved limited success so far in his ability to drain all hope from the political process, Trump’s reordering of campaign priorities suggests a new focus for the last month and a half of the election campaign. According to sources familiar with the Republican candidate, Trump has decided to launch his war on the venerable debate tradition by tweeting indignantly and pretending he is practicing for the second one.