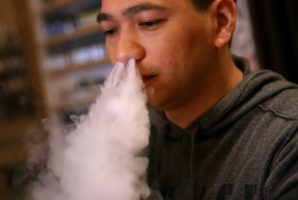 Area freshman Tyler Black, WCAS ’20, is having a difficult time finding a local source since moving to the family-friendly city of Evanston. Black lamented on only having one dealer now to go to: Whole Foods.

“It’s like they have a monopoly over grocery stores or something,” Black said despondently between hits off of his pen. “Back East I could choose between Food Lion, Giant, Safeway, and—if I was desperate—Shoppers. Here, there is only Whole Foods. Without any competition, they are free to cut their product and overcharge for it.”

Black proceeded to search through the pockets of his discarded jeans on the floor until he found a crumpled up receipt. He hastily smoothed it out and handed it over. “You see, right there,” he said while pointing at the uncomfortably damp paper. “I used to pay $4.64 for my Horizon Organic 2% milk. [Whole Foods] charged me $4.99. I’m a college student paying over $60,000 for tuition, and $15 dollars per thing of e-juice. There should be cheaper options in the area. I want a grocery store safe space.”

When asked whether he would start frequenting Trader Joe’s instead, Black replied that they “actively engage in cultural appropriation,” and he could therefore not support such a business.