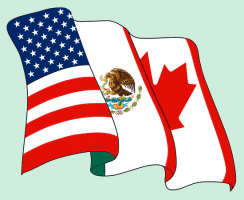 According to many expert analysts, NAFTA, as both Canada and Mexico seem to have been so embarrassed as to voluntarily leave.

Despite these facts, Mr. Trump may have confused NAFTA with NATO, which he also has described as a “poorly negotiated” trade agreement.