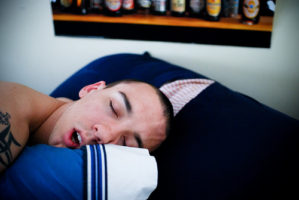 Weinberg freshman Fred Engel has a rather unique talent: according to roommate Harry Jacobson, MEAS ’20, and multiple eyewitnesses, he is capable of and, indeed, has been reciting verbatim the Communist Manifesto in his sleep.

“It was pretty difficult to figure out what he was saying. I got a couple of guys together to watch his for a couple of nights, but we couldn’t figure out what he was talking about,” a sleep-deprived Jacobson said,  “Until we took a recording of him and put it on Reddit.” With the help of a user who calls himself “MaRX10v3r,” they were pointed in the right direction. No information could be found on MaRX10v3r other than that his IP address led to a location in Vermont.

“I’ve never had a history of sleep talking and, more importantly, I’ve never read the damn thing!” said Engel, wearing a red tracksuit on his way for his morning jog. He has not felt any difference in his social life since he started sleep-talking, but he did feel as though he was being treated differently by strangers. “There was an old man with a large beard who yelled ‘Disappointing, comrade!’ when he saw me entering Whole Foods.”

Engel is more distressed that his efforts to join the newly formed NU Democratic Socialists, have been rejected for fear of negative publicity. “People already think we’re communists. We can’t have someone who literally quotes the Communist Manifesto in his sleep prove them right,” said proletarian Charles Blackstone, WCAS ’19. “If he can do John Rawls instead, we may reconsider.”