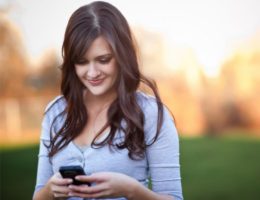 Psychologists say that the best way to ease stress is to lighten your load, and that’s exactly what Weinberg freshman Kelly Jones did. When it came down to dropping either the long Chemistry labs or the long “lovey” text messages with the high school boyfriend, Jones didn’t hesitate to drop the boyfriend.

Ex-boyfriend Benjamin Smith, a freshman at University of Indiana-Champlain, was heartbroken. The couple had been together throughout all of high school, and Smith said he had even toyed with proposing. His plans abruptly changed, however, when Jones realized that dropping Smith would remove a shit ton of items on her long to do list.

“Each time he texted me something cute—and we’d text for hours—I’d blush and daydream for 10 minutes. There’s not enough time in a day for all of that, with homework, classes, and my weekly lab.”

Over time, Jones realized she could not fit everything on her plate. So she pushed Smith off her plate, submitting the text to drop him right before the deadline. “All of a sudden, I could have a life again. I could sleep 8 hours a night. And my acne cleared up!”