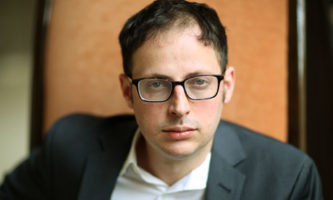 Customer reports are flooding in that former analyst Nate Silver has filled the final opening for server at the local IHOP on Asbury Avenue.  Nate Silver, famous for failing to predict Celebrity Apprentice host Donald Trump’s rise to the Oval Office, described the unorthodox move as “a time for transition and rethinking my life.” He also added that it was “statistically, the only way to lay low enough to hide from President Trump’s space drones.” So far, IHOP executives are “excited to have him aboard” and describe him as doing a very good job.

Customers are also excited about the new hire. According to several witnesses, Silver will not only make you a pancake, but statistically determine its type, size and toppings based on a database of demographic information before you even order. For instance, Obama once visited and Silver got the pancake exactly right. He is also allegedly developing a “dream team” of dishwashers to wash dishes “faster and better than ever before.”

Other customers, though, are less happy. “I was very excited for my pancake,” an anonymous customer recounted, “he said that it had a 71.4% chance of being my favorite.” However, when Silver came out with the pancake, he revealed that it was in fact not his favorite pancake but rather an old sock he found in the garbage 23 days prior. “There was a 71.4% chance of getting your favorite,” Nate Silver explained, “But there was another 28.6% chance it was an old sock. You need to take into account uncertainty.” At first the customer was very angry but slowly he began to calm down, “I guess it was just systemic polling error,” he later mused.

Despite Silver’s unique performance as pancake flipper, many Northwestern students are not happy. “I just wanted a job,” Bob Jeffries, a still-unemployed student complained, “I got past the first few interview rounds and thought I was finally going to achieve my dream of making money at IHOP. But no, wunderkind and Times Top 100 Most Influential Person of the Year Nate Silver came in and took the job before I even had a chance. What were the odds?”

Nate Silver reports that they were 95.8%.

At press time, President Trump was enraged by his detractor’s success in the pancake-making industry. “Let me tell you, I’m going to make a big beautiful pancake and I mean it. I know the best toppings and they tell me it’s gonna be huge. It’s gonna be tremendous and I know,” the President-Elect stated.  “So about those space drones then,” he added, “why aren’t we using them?”